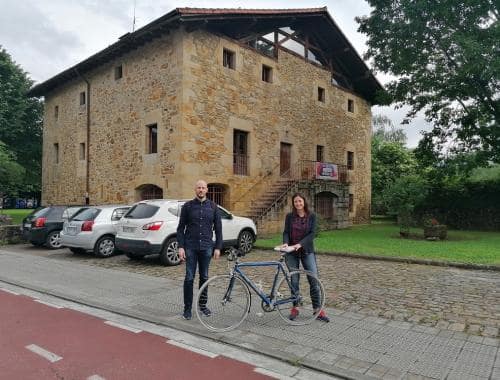 The Durangangaldea Commonwealth is determined to bet on the promotion of cycling and active mobility and, for this, it has focused on the adaptation of workplaces and other mobility generating nodes in the territory, such as industrial areas, municipalities and educational centers.

The strategy is clear: involve the maximum number of companies and key Stakeholders in the territory in projects aimed at consolidating the daily use of cycling, thus increasing the scope and impact of these actions. To centralize this strategy, the Commonwealth has chosen to extend Cycle Friendly Employer certification in its territory.

The certificate is part of a project promoted at a European level by the European Federation of Cyclists to promote the optimal adaptation of workplaces and to recognize companies that promote this type of initiatives, distinguishing them into three categories: gold, silver and bronze.

To give the example, the Commonwealth of Durangangaldea has chosen to start this project by certifying its own headquarters. Mireia Elkoroiribe, president of the institution, has announced that the objective is to certify the region in its entirety, for which it requests the collaboration and participation of public and private Stakeholders.

The Commonwealth has already commissioned Bikefriendly to diagnose the territory from a cycling point of view and certify its headquarters. At the same time, the Commonwealth of Durangangaldea has summoned the municipalities and companies of the region to a meeting in which it will be explained in more detail what this certification consists of and the benefits that promoting cycling has for the staff.

The objective of this process, as explained by the president of the Durangangaldea Commonwealth, is to promote the adherence of public and private Stakeholders to the territory certification project: “The more companies initiate the procedure to obtain the certificate and take it by diagnosing the situation, the easier it will be to detect the needs of Durangaldea as a whole and implement the necessary corrective measures."

Bikefriendly is the consultant appointed by the European Cyclists Federation for the management in Spain of the Cycle Friendly Employer certificate and, specifically in the Basque Country, it operates hand in hand with Bike Innovation Hub, an association made up of three entities: Urbegi, Axalko and Bikefriendly, and which was formed to offer active and sustainable urban mobility solutions through the implementation of business models that generate quality jobs for vulnerable groups.